In the energy system of the future, renewable electricity plays a key role and the key technology in this value chain is green hydrogen production via electrolysis. The transition to renewable energy feeds the platform for green value chains with H2 as intermediate for products (e.g. via the syngas platform or the ammonia platform), for mobility and for heating.

Hydrogen production via electrolysis is currently done only at 1-MW scale. However, to match the demand for hydrogen of the Dutch industry and to play a significant role in buffering the future intermittent power supply, a significant scale up is required of the electrolyser capacity at least to the 1-GW scale.

In the quest for eliminating CO2 emissions, while maintaining and enhancing energy consumption and industrial activity, more and more hydrogen is seen as part of the solution, both as an energy carrier, as well as feedstock for chemical production.

Water electrolysis based on green electricity to produce green hydrogen qualifies perfectly for this purpose. However the technique needs further development in order to scale it up into an economically and operationally viable large scale (GW) solution in industrial clusters. This project serves this aim and consists of three parts:

1) Scientific: Which of the existing electrolysis technologies has the best potential? Such as, among others, costs, flexibility, heat management and pressure expectations, to be the core of the concept. What will be the effect of mass production on costs and performance? Which is the resulting operational model of the technology in order to serve the needs of real industrial cluster demands (E-input, H2 output)?

2) Business: What is the real context of the five industrial clusters (located in Rotterdam, Amsterdam-Ijmuiden, Geleen, Terneuzen-Sluiskil, and Delfzijl-Eemshaven)? What are real capacity-, volume-, and economic demands for hydrogen, oxygen, and heat? What are infrastructural possibilities and constraints?

3) Engineering: How can this result in a conceptual design that gives a full overview of what is necessary? Think of inside and outside battery limit (the electrolysis installation) to deliver industrial cluster demands at given E- supply patterns (eg wind-patterns). In addition, it is evident to conclude on the economics (eg CAPEX, OPEX, hydrogen costs).

This project will be carried out till late 2021. It has an iterative character since several loops will be necessary to come to an optimum result. This optimum should reflect economically viable hydrogen costs in the expected near future (2025 and onwards).

These hydrogen costs will be the result of the final conceptual design, but will also be influenced by potential upsides: eg Oxygen and Heat credits. The benchmark hydrogen reference, will consist of present grey hydrogen production costs and estimated CO2 emission costs or alternatively grey hydrogen costs combined with CCS.

A partial study revolving around the required space for a gigawatt-scale electrolysis plant, the required infrastructure, and the hydrogen demand at a large number of potential locations resulted in a public summary in the spring of 2020. Experts from industry, energy infrastructure and regional government of all five industrial clusters contributed to the study. Over the past two years, they convened regularly to map out the possibilities and requirements for gigawatt scale hydrogen production. This was the first time that such an inventory has been carried out on a national scale.

For each of the five industrial regions of the Netherlands we have assessed the potential for large scale electrolysis. We have identified locations, assessed the infrastructure for electricity, water and hydrogen, as well as the current and future demands for hydrogen. Adding to this, we have looked at the potential for residual heat usage. See the corresponding map online.

There is a sense of urgency for green hydrogen to achieve the European Green Deal and realise Europe’s clean energy transition. The EU ambition is to install at least 40 gigawatt (GW) of renewable hydrogen electrolysers by 2030, producing up to 10 million tonnes of renewable hydrogen. Clearly, this requires upscaling of water electrolysis technology. The current state-of-the-art is at 10 megawatt scale, whereas GW scale green hydrogen plants are needed.

In the Hydrohub GigaWatt Scale Electrolyser project a technical study was done that aims to reduce capital expenditures (capex) and deliver conceptual designs (blueprints) for GW water electrolysis facilities in the five main industrial clusters in the Netherlands. We have prepared a baseline design with a cost breakdown as first phase of the project to assess the economics of a GW green hydrogen plant which can be built in 2020. This design was completed for both Alkaline and PEM electrolyser technology. We summarized our findings in this public report.

We presented the results during the online webinar ‘Moving electrolysers into the gigawatt scale’. Watch the webinar and find all relevant downloads of the webinar on this page.

What it would take to produce green hydrogen on an industrial scale?  What could a one-gigawatt green hydrogen plant  look like? And what will it cost? We present the technical design and the associated total investment costs of a greenfield 1-GW green-hydrogen plant that would be built, and up and running, in a Dutch port area by 2030. This project shows that anticipated total investment cost levels of 730 €/kW for AWE and 830 €/kW  for PEM are within reach.

The CAPEX required will be about half of what would be required for the 2020 state-of-the-art design. To come to this cost reduction, several improvements have been made to the state-of-the-art 2020 design. We incorporated innovations at the stack level, scaling up to larger stacks and modules, and came up with optimizations for, and other improvements to the electrical installations, utilities, and balance of plants.

In the report we present the results figures for potential investors and stakeholders. The results of the report ‘A One-GigaWatt Green-Hydrogen Plant: Advanced Design and Total Installed-Capital Costs’ were presented during a symposium on January 20th.

Take a VR-tour to see how a GW green hydrogen plant would look like and what technologies are used. 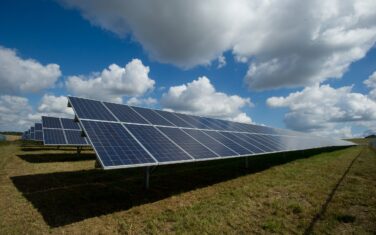 The road to green hydrogen

Developments around green hydrogen are gaining momentum. ISPTs Hydrohub Innovation Program focuses on developing knowledge and technology for the production of green hydrogen on a large scale since 2017. The...

This project is co-funded by TKI-E&I with the supplementary grant 'TKI- Toeslag' for Topconsortia for Knowledge and Innovation (TKI’s) of the Ministry of Economic Affairs and Climate Policy.