The Institute for Sustainable Process Technology (ISPT) coordinated a unique study into the cost of scaling up electrolysers to the gigawatt scale for producing green hydrogen. ISPT hosted a webinar on October 29th around the results (‘Moving electrolysers into the gigawatt scale’) of the study that attracted worldwide praise. Bart Biebuyck, executive director of Fuel Cells and Hydrogen – Joint Undertaking (FCH-JU) said: “Congratulations on your pioneering role. The Netherlands is setting the tone. I believe the study you did is important to realize the huge hydrogen in the Netherlands.”

The Netherlands is well positioned to take the lead in the green transformation of the heavy chemical industry. “We have lots of offshore wind energy and large consumer centers along the coast: the big clusters of chemical industry. Nonetheless, the transformation we face is unprecedented,” said Andreas ten Cate, Program Director System Integration at ISPT. “Hydrogen is a key element to enable the transition from fossil to green energy. The scale that we need to reach is up to 80 GW, half of which should be deployed inside the EU. This is a global challenge. We collectively want to make this step to the gigawatt scale. Our public report ‘Gigawatt green hydrogen plant’ is another step towards this goal.”

In the energy system of the future, renewable electricity plays a key role. The key technology is green hydrogen production via electrolysis. This is currently done only at 1 MW scale. However, to match the demand for hydrogen of the global industry and to play a significant role in buffering the future intermittent power supply, a significant scale up is required of the electrolyser capacity to the gigawatt scale. The current study done in the Hydrohub GigaWatt Scale Electrolyser project presents a state-of-the-art design and total installed capital costs of a gigawatt green hydrogen plant. The public report reveals the results of a baseline study (2020 level) design of a gigawatt electrolyser plant for green hydrogen and presents a corresponding cost analysis.

Carol Xiao (Program Manager Hydrogen at ISPT) presented the results of the study during the webinar. Xiao outlined the scope of the project and highlighted that the Netherlands as a location is not a coincidence. “The location we chose is a current industrial zone in the port area. The offshore wind from the North Sea supplies ample capacity.” Two technologies were investigated, said Xiao, Alkaline and PEM. “Both are promising to scale up to gigawatt scale and we investigated their differences. The scope of the study encompasses all steps from grid to users or hydrogen backbone.”

The results of the study are well summarized in the report: “It provides a complete and realistic picture of the capital expenditures required for building such a plant, powered by wind energy, and ready to provide green hydrogen to industrial end-users.” For alkaline electrolyser technology a total installed cost of 1400 €/kW is estimated for 2020, for PEM technology the cost is 1800 €/kW.

The difference between these two technologies is largely related to stack costs, which are higher for PEM technology. Furthermore, Xiao stressed the importance of incorporating not only direct but also indirect costs, owner cost and contingency for end-users. These costs are often not reported but need to be taken into account from an investment point of view.

Hydrogen is a key building block, said Marco Waas (Vice President/Director RD&I and Technology at Nouryon) and he stressed that Nouryon is participating in the ISPT Hydrohub Gigawatt Scale Electrolyser project to share and to learn. But the key challenge, he said, is to modify the existing chemical industry clusters into a circular economy where hydrogen plays a role. “The basic technology is here, now we need to scale up. To reduce the cost of the hydrogen electrolyser, we can not stay in the lab.”

Significant hurdles are not only technical, Waas said, but are also about connecting new value chains, for example integrating the energy or steel sector with the chemical sector. “Also, we need new regulations and support mechanisms. We are competing with optimized technologies such as methanol which is always challenging to beat at that scale. Consumers are not paying more, that’s why we need regulations.”

The webinar saw a full program with many international speakers. “It is an exciting journey we’re on,” said Ten Cate. “We are trying to do something in a completely different way. We need to scale up not just in making hydrogen, but also in how to use it downstream, in addition to generating sufficient renewable power for green hydrogen. We need to think differently and that is a tremendous challenge.”

The question was asked several times whether the ISPT gigawatt scale study serves as a blueprint to others in the world. Not all countries are ready to answer that question, but Ten Cate said: “We are open to collaborate and share our results. We would really like to work together on this to bring the concept to reality. We built the results together with the industry which makes it a very solid work and we extend beyond the numbers that are generally shared. We look at what it really costs to build the entire factory.”

Hélène Chraye (European Commission) said that “increasing drastically the supply of clean hydrogen in the EU is a priority for the European Commission. We are happy that so many member states are now deploying a clean hydrogen strategy. Moreover, it will need to reinforce consistency between member states, and with the countries outside. Technology and infrastructure will have to be supported by a proper regulatory framework, including standardisation, to bring full benefits of a European hydrogen economy”.

On the other side of the globe, Australia focuses on becoming a hydrogen exporter. Australia has rich resources, said Alex Cooke of the Australian Government. “We believe there is a huge opportunity for Australia to produce hydrogen,” said Cooke. “The government is committed to funding a hydrogen hub and electrolyser projects and Australia has bilateral partnerships with Japan, South Korea, Singapore and Germany and is engaged in several multilateral cooperations.”

Germany has leading ambitions, committing to 5 GW of electrolysis capacity by 2030. The German strategy focuses on reducing cost and creating demand, said Julius von der Ohe (NOW). “A significant part of the funding and investments is dedicated to derivatives of hydrogen, for example synthetic fuels for the aviation sector. But there is still an ongoing discussion on how to create a market demand.”

Specific for Germany is the regulatory framework, Von der Ohe said. “A big component of the cost of hydrogen in Germany is taxes and levies. There is room for improvement in Germany. The next challenge from 2030 to 2050 is to get the big consumers such as the chemical industry and steel production into the market to create substantial demand.”

Finally, Sunita Satyapal (DOE) highlighted the US H2@scale concept that ‘explores the potential for wide-scale hydrogen production and utilization in the United States’ by scaling up technology, reducing cost and addresss enablers. Satyapal addressed the omnipresent question ‘where are we in terms of cost of electrolysers?’. “The US is very market driven. The main cost is electricity. If we can get down to 3 cents per kWh that would be very exciting. Then we can reach the US target of 2$/kg of hydrogen.” She emphasized the importance of the integration of electrolysers with the grid. “We need continued collaboration to accelerate progress.”

As a result of several group discussions, it was reported that it is clearly understood among the audience how important the results of this study are. Summarizing the outcome of the discussion, Peter Ripson (Project Manager Hydrohub Gigawatt Scale Electrolyser project) said: “The trick is to harmonize with the grid on one side and to feed the electrolyser on the other side and then compensate for fluctuations. We should take care to find an optimum and that we do not destroy the Capex by this compensation.”

Technically, the discussions revealed that we can expect a lot of new materials in the stacks. It is suggested that we learn from the developments in fuel cells, because this technology is close to electrolysers. Finally, compact designs of factories can be reached by stacking building blocks, suggested participants, but not everyone was convinced that there is a need for more compact designs. 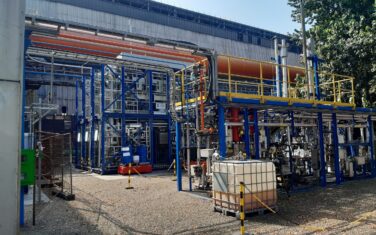 After overcoming a number of technical hurdles, a new pilot unit for converting syngas to chemicals has been started by Dow at the first attempt at a steel mill owned... 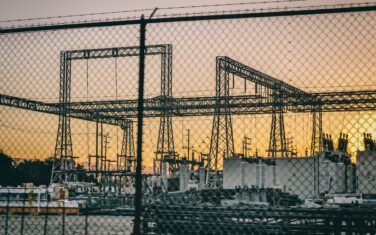 R-ACES project has built a legal tool that will help develop energy cooperation projects for industrial sites and business parks. 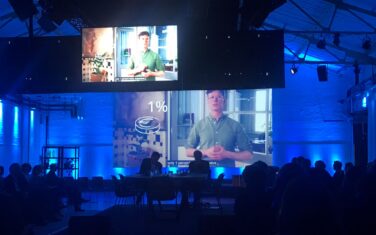 The Netherlands has what it takes to play a pioneering role

When it comes to circularity and renewable energy, the Netherlands can play a pioneering role.
Next item